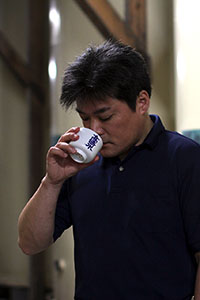 Traditional Takashimizu taste established by successive Toji can be expressed as “rich and full-bodied”. In order to maintain and succeed to this taste, it is important to observe carefully the action of microorganisms which produce sake, and to control the temperature and amount of moisture properly for setting environment which is suitable for microbial action. I would like to continue making sake loved by a lot of people with all brewers together, brewing honestly without any compromise.