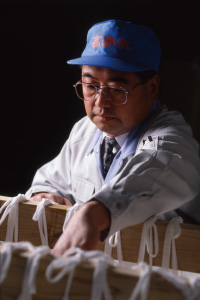 The reason I introduce the latest machine is to support our human’s skill.

I have a thought that Sake is brewed by not Toji but microorganism such as koji-mold or yeast. I carefully grasp the condition and take care of microorganism as if I was talking with them because they react to the surrounding environment sensitively. In Goshono brewery, these care is managed by the latest machine; however, this is just for supporting human’s skills. The most important thing for sake brewing is still traditional human’s skill after all. I keep challenging myself to new sake brewing way with collaboration between the latest machine and traditional skills to persue sake which goes well with any kind of dishes and moves the customers.