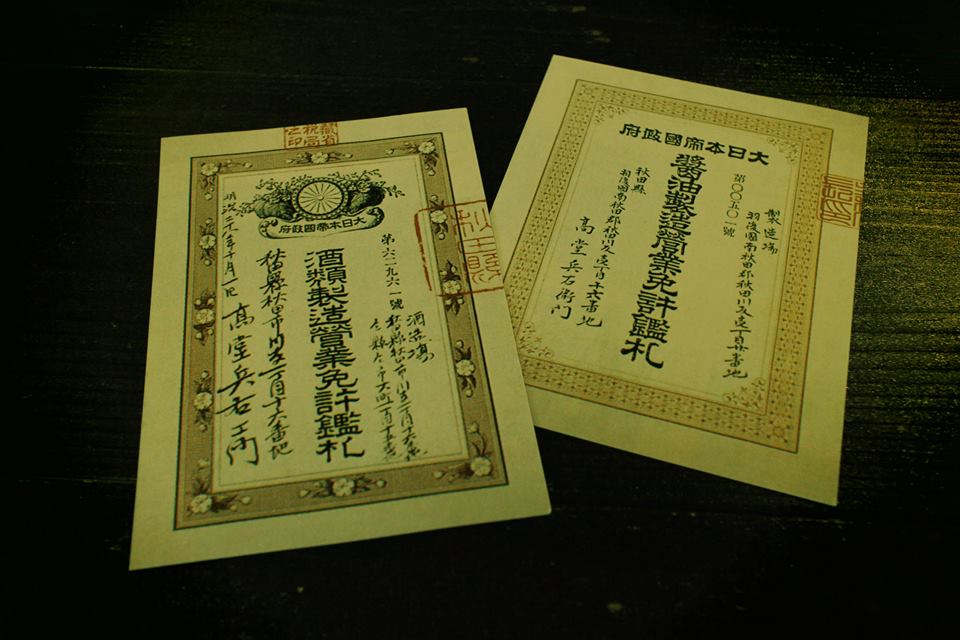 Takashimizu history began in 1944 after merging of 12 small breweries during World War II. In previous Edo period, 3 breweries, “Kikusui”, “Kokusui”, and “Hodoyoshi” out of total 12 breweries had started their sake business. In the Meiji period, the situation of brewing business dramatically changed. This time, please let us introduce you about sake making in the Meiji era called “revolutionary period” for sake brewing field.
During Edo era, since sake making needed lots of rice which was the staple food for Japanese and the important revenue for government, government controlled the market depending on the situation and the market place.
One of the example of controlling method was “Sakekabu”. This was the kind of licence for sake brewing and unless people did have this, no one was allowed to make sake.
Moreover, mainly new sake business was not allowed, and taking over “sakekabu” licence needed the permission from surrounded breweries.
In addition to this strict situation, the available quantity of rice for each breweries was also very limited. Even though people wanted to start the sake business, they couldn’t. Even though people wanted to make more sake, they couldn’t. Previous Edo period was such a tough period.

However, in the Meiji era, those limitation was all lifted. If a person had enough money for paying licence fee, licence tax, and had the brewing skill, everyone could start sake making business. The picture above is the licences for sake making and soy sauce making which Takado family had. ※Takado family is the one of 12 breweries we introduced in previous column as “Hodoyoshi”.
In 1896, thanks to the establisment of Akita Revenue Bureau in Akita city, brewing technique and sake quality was dramatically improved. In 1905, Ou Main Line which connects between Fukushima-Yamagata-Akita and Aomori Prefecture was opened its entire rail line.
Then as a resalt, the distribution was expanded to the outside of Akita Prefecture.
During the Meiji period, 5 breweries out of 12 started their each brewing history, and we would like to introduce their stories one by one from next column.

【A Scene of Brewery Open Day】